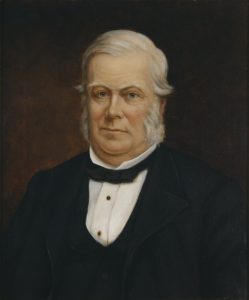 The sitter (1815-89), known as Victoria’s second settler, followed his brother Edward to Portland from Launceston in 1834, and introduced merino sheep to Victoria.

A’Beckett was commissioned to paint this portrait by Henty’s family, probably from a photograph or print.