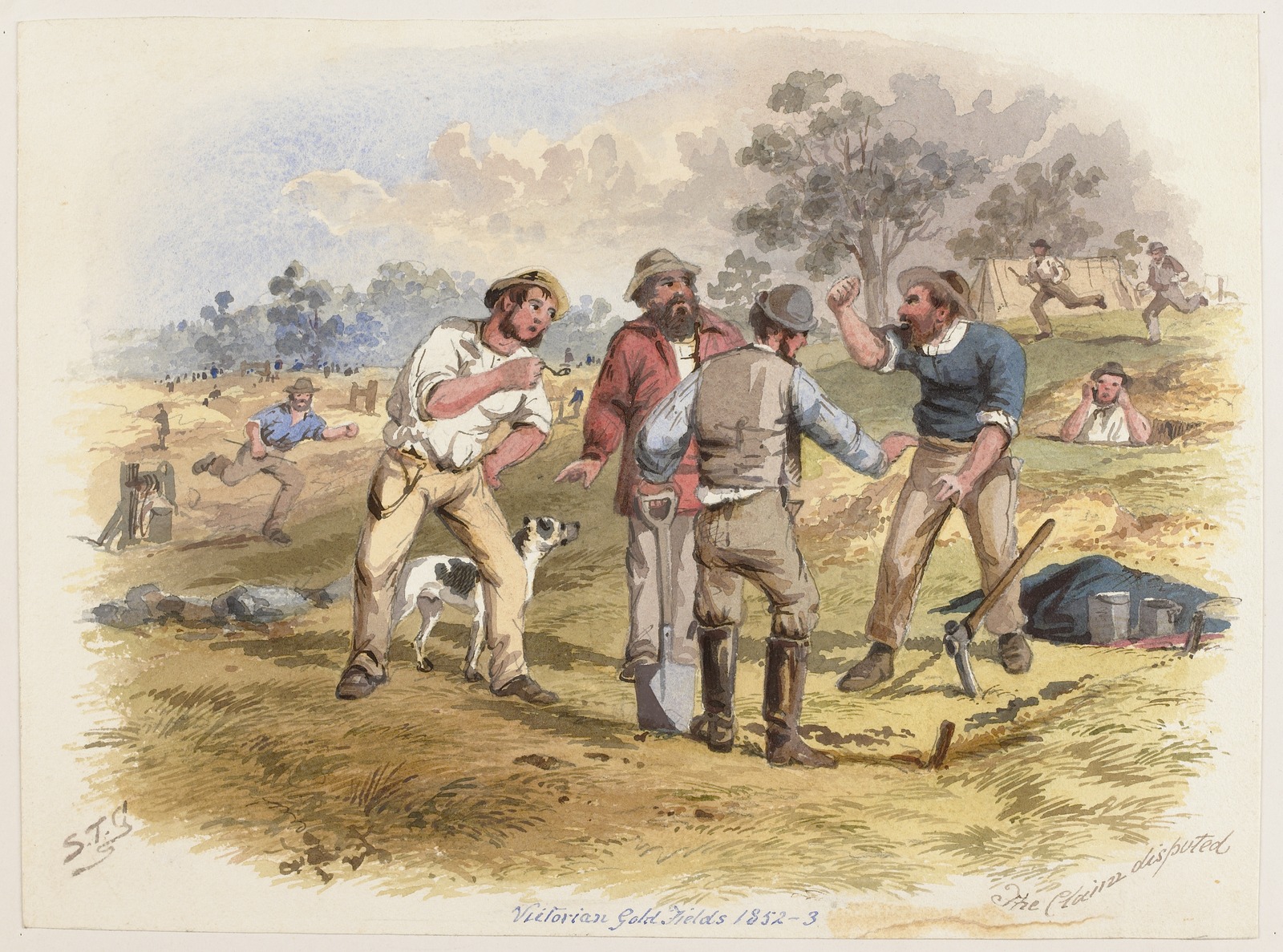 The specialist field of watercolour painting attracted the attention of both professional and amateur practitioners and collectors in the 19th and earlier 20th centuries. Melbourne’s pre-Felton collection included a small but significant group, now somewhat reduced by later de-accessioning (as elsewhere in this catalogue, an asterisk indicates works no longer in the collection).

In the early years of the Melbourne collection, some significant watercolours were acquired, including several notable commissions, especially Gill The Victorian Gold Fields during 1852-3… 1869 {1869} SLV [WT] and Martens One of the Falls on the Apsley 1873 {1873} NGV [WT], commissioned respectively by the Melbourne Public Library and the National Gallery of Victoria. John Pascoe Fawkner’s substantial 1868 gift of works on paper included several watercolours of early Melbourne, especially by George O’Brien (see linked artist entry, also listing related drawings).

These acquisitions formed the basis for subsequent expansion after 1875. Watercolours acquired after that date include the following  (refer individual entries for details, if not specified):

– Examples by Brierly, Gilbert and Tommasi, shown at the Melbourne International Exhibition 1880-81, and subsequently acquired for the collection.

– 3 works (by Meyerheim, North and Smythe) bought on the advice of Hubert von Herkomer in 1891-2.

– 7 examples bought from the British Art Gallery after being shown at the Anglo-Australian exhibition held in Melbourne in 1892: see Bromley, Cook, Fahey, Hayes, Hern, Parker and Weedon (several of these were subsequently de-accessioned).

– Following his appointment as NGV Director in 1892, Bernard Hall was a significant contributor in his own right as advisor on local purchases, including 2 significant watercolours by Varley. In 1904, Hall also selected 9 watercolours (almost all landscapes) from Alfred Felton’s personal collection, acquired under the terms of his will: see Buvelot (2 works), Cook, Leitch, Ludby, Marshall, O’Brien, Roberts and Simoni.

– 9 contemporary British examples bought in 1901 on the recommendation of the Royal Academy, selected from the exhibition in that year of the Royal Society of Painters in Water-Colours: see Bell, Brockbank, Bundy, Hobson, Hughes, Lance, Pedder, Rainey and Smith

By 1904/5, Melbourne’s watercolour collection comprised some 150 individual examples, plus the 2 Gill goldfields albums (comprising 40 and 50 sheets respectively), and * Unknown “Portfolio of 123 Wildflower drawings” {1872} Loc? [WT]: a grand total of almost 375 sheets. Leaving aside the mysterious wildflower portfolio, some 74 of these are no longer in the collection, many of them documented as de-accessioned and transferred or auctioned during the 1940s and early 1950s. Admittedly, the absence of some of these works can hardly cause much regret, including the various Italian tourist examples acquired during visits to Rome by the Melbourne gallery’s London agents in the 1870s and 80s (see under Gigli, Guardabassi and Provaggi). However, the loss of other works, notably watercolours by British artists active in the later 19th century, seems more regrettable: see e.g. * Smith (C.) Christmas Eve 1901 {1901} Loc? [WT], auctioned off in Melbourne in 1950 (with other works); it re-surfaced in London in the 1990s, and sold at auction in 2008 for just under GB£30,000.

Fortunately, many of the better pre-Felton watercolour acquisitions survived the cull, and a number were featured in the NGV’s 2011-12 in-house exhibition British Watercolours, 1760-1900: The Age of Splendour : see e.g. Bromley The Road that Skirts the Common {1892} NGV [WT].

Particular reference is made in these entries to Mallalieu’s specialist 1976 study (refer bibliography for details). It should also be observed that there is some inevitable overlap between watercolours and drawings in the present catalogue, with several works listed in each category that could as easily be included in the other: see e.g. Hoddle Melbourne from Surveyor-General’s Yard {1893} SLV [WT] and O’Brien Melbourne seen from the Hospital {1868} SLV [DR].