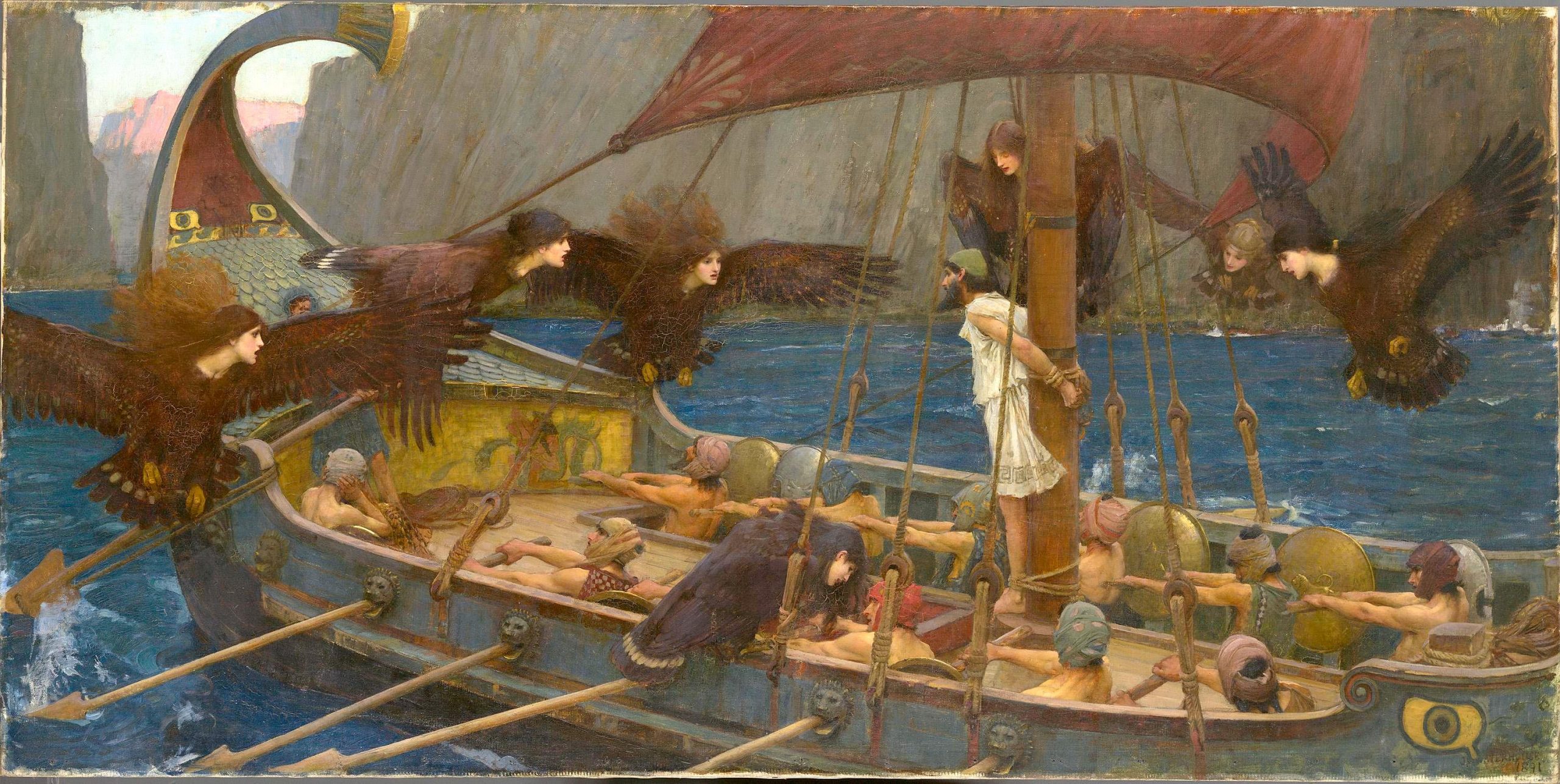 Initially, painting was not intended to be a focus for collecting for Melbourne’s art museum, preference being given to plaster casts and busts. But this view soon changed, and paintings began to enter the collection from 1860.

By 1905 painting had assumed a dominant position in both the NGV’s acquisitions budget and its exhibition spaces. There were almost 400 individual pictures in the pre-Felton collection, and the great majority were on permanent display. Most of them dated from 1800 or later, and many were acquired soon after they were produced, although the collection was generally conservative in character, and diverse in quality.

Portraits and landscapes predominated (including a remarkable number of canvases featuring sheep and cows, no doubt to the taste of the pastoralists among the gallery’s early supporters and visitors). Other works treated Biblical, classical or historical themes, many of them typically Victorian in their sentimental or “improving” tone. Genuine Old Masters were almost nowhere to be seen, copies and replicas still being regarded as acceptable alternatives (see now Reproductions, casts and copies), although there were signs that this view was beginning  to shift later in the century.

An exhaustive analysis is well beyond the scope of this introduction, and also superfluous, since others have already mapped out the major lines of the early history (again, see general Introduction to this catalogue for references, especially Cox 1970, Downer & Phipps 1985, and Galbally & others 1992). Accordingly, only a few key points and examples are singled out here.

As mentioned, portraits were prominent, mainly of colonial worthies (paralleling the marble busts and “Oval Portraits” listed elsewhere in this catalogue). Although many are now essentially of documentary interest, others remain valuable in artistic terms: see e.g. Beechey Portrait of A Lady {1865} NGV [PA]; Fox Sir Frederick Sargood 1897 {1897} SLV [PA]; Longstaff Portrait of G.F.Folingsby {1891} SLV [PA]; and Tocqué [attrib.] Portrait of a Gentleman {1876} NGV [PA] (this last-named work, whose author was then unknown, was a judicious recommendation by Eugene von Guèrard while he was Master of the National Gallery School).

There were also many pictures on historical subjects, often displaying meticulous archaeological accuracy (see e.g. Alma-Tadema The Vintage Festival 1871 {1888} NGV [PA] and Long Queen Esther 1878 {1879} NGV [PA]). Meditations on the fate of Early Christians were popular (e.g. Rivière A Roman Holiday 1881 {1888} NGV [PA]). So too were military themes, bearing out Christopher Wood’s observation that Victorian painters and their audiences demonstrated an almost insatiable taste for battles, especially from the Napoleonic era. The most popular of several such works in Melbourne, as voted by NGV visitors in 1906, was Thompson Quatre Bras 1875 {1884} NGV [PA] – also an example, still rare at the time, of a major painting by a woman.

Landscape was a particularly strong focus, especially images of the British countryside familiar to so many colonial Australians. The homesickness many experienced is one obvious explanation for this emphasis; indeed, a number soon returned “home” (like some of their 20th-century successors, the so-called “Ten Pound Poms”). Still, modern critics have judged this aspect of the early Melbourne painting collection harshly, and there is an undeniably plodding and repetitive character to many of the British and European landscapes acquired (including, frankly, almost all the paintings selected in 1904 from Alfred Felton‘s collection, under the terms of his will). There were, nevertheless, important exceptions, such as  * Bonington Low Tide at Boulogne {1904} Loc? [PA] (the latter from Felton’s personal collection), and Turner (J.M.W.) Dunstanborough Castle {1888} NGV [PA].

Even at the time, some observers noted lost opportunities, such as the failure to purchase anything by John Constable, although several landscapes by other artists influenced by him, such as Peter Graham, were acquired (see now Cox NGV 1970, esp.pp.22ff.).

Nor did any significant French plein-air paintings enter the collection during the period. Even if sufficient funds had been available, it seems debatable whether local taste could readily have accommodated such works. Later, though, shifting taste and the resources of the Felton Bequest led to significant Impressionist purchases for the NGV, beginning with Camille Pissarro’s Boulevard Montmartre 1897, in the first group of Felton Bequest purchases recommended by Bernard Hall in 1905.

Nevertheless, several good examples of progressive 19th-century European painting were acquired prior to 1905: see e.g. Courtens Morning {1881} NGV [PA], Fantin-Latour Marigolds 1891 {1892} NGV [PA], Souza Pinto In the Fields 1892 {1893} NGV [PA] and, perhaps most impressively, Nozal The Seine at St Pierre {1891} NGV [PA]. The last two paintings noted were both bought on  the advice of Australian painter John Longstaff, who, in Paris as the recipient of the first NGV Travelling Scholarship, c.1887-95, flirted briefly with Impressionism, before defaulting to a more academic style for the remainder of his long and increasingly conservative career.

Throughout the history of the NGV, artists and critics have complained regularly about the perceived lack of attention to Australian art in the collection, and the imbalance between funds spent on local and international painting. But the pre-Felton painting galleries actually presented visitors with a considerable range of good Australian examples, across a variety of genres, from portraiture and historical subjects, to landscape painting.

Significant local landscapes were acquired during the 1860s-70s, beginning with the selection of Chevalier The Buffalo Ranges, Victoria 1864 {1864} NGV [PA] as the winner of a competition designed specifically to initiate the collection of Australian painting. This was soon followed by the acquisition of major landscapes by von Guérard, Buvelot and others. Lively debates held in Melbourne at the time weighed the relative merits of these different painters: for an informative account, see Downer & Phipps, Victorian Vision (1985), ch.2.

As the collection continued to develop, there was greater scope for comparison between British/European landscapes and locally-produced examples, especially as artists and spectators became more familiar with European traditions gradually re-calibrated their vision.

Bernard Hall, in the years immediately following his appointment as NGV Director in 1892, showed considerable imagination and acumen in this regard. Hall’s arrangement of the expanded and refurbished exhibition galleries, as recorded in the NGV catalogue produced under his supervision in 1894, featured a number of interesting juxtapositions of Australian and Northern European landscape paintings, encouraging gallery visitors to make the comparisons for themselves. In the McArthur Gallery for example, Buvelot Waterpool near Coleraine 1869 {1870} NGV [PA] was displayed between two traditional English landscapes of the period, Bough Weald of Kent 1857 {1871} NGV [PA] and Creswick & Ansdell England 1850 {1878} NGV [PA], and the Buvelot and Creswick/Ansdell canvases were reproduced on facing pages in NGV 1894 (pp.86-87).

During the 1890s, Hall also advised on the purchase of a number of examples of more progressive recent Australian landscape painting (refer linked entry on Hall, noting examples by Davies, Humphrey, Mather, McCubbin, Withers, and others). For instance, in 1896, he recommended the purchase of Streeton ‘The Purple Noon’s Transparent Might’ 1896 {1896} NGV [PA] (like many of the other Australian landscapes mentioned, only recently completed), concluding, with a pre-Federation flourish: “I strongly advise the Trustees not to miss the opportunity of acquiring it, & of adding to the Australian section what is most characteristically Australian in the way of pictorial presentment.”

By 1905, then, a relatively small but impressive group of recently-produced Australian paintings could be viewed in the NGV, alongside international examples.

The key exception was Indigenous art, which, together with images of Australia’s original inhabitants, was virtually non-existent in the pre-Felton collection. In fact, this remained the case for many years after 1904/5. Not until 1949 was Robert Dowling‘s haunting Tasmanian Aborigines (1856-57) purchased for the NGV, although several of Dowling’s more conventional canvases were held in the pre-Felton collection (refer artist entry for details). And it was only in the 1980s that Aboriginal art was finally collected seriously for the NGV.

Remarkably, however, two small paintings by Indigenous painter William Barak did enter the Melbourne collection by donation in 1895. But neither these works nor the impressive portrait of the artist (Fuller Barak 1885 {1901} SLV [PA]) were listed in the NGV’s 1905 catalogue, still evidently being categorized as part of the Museum’s Ethnographic collections.