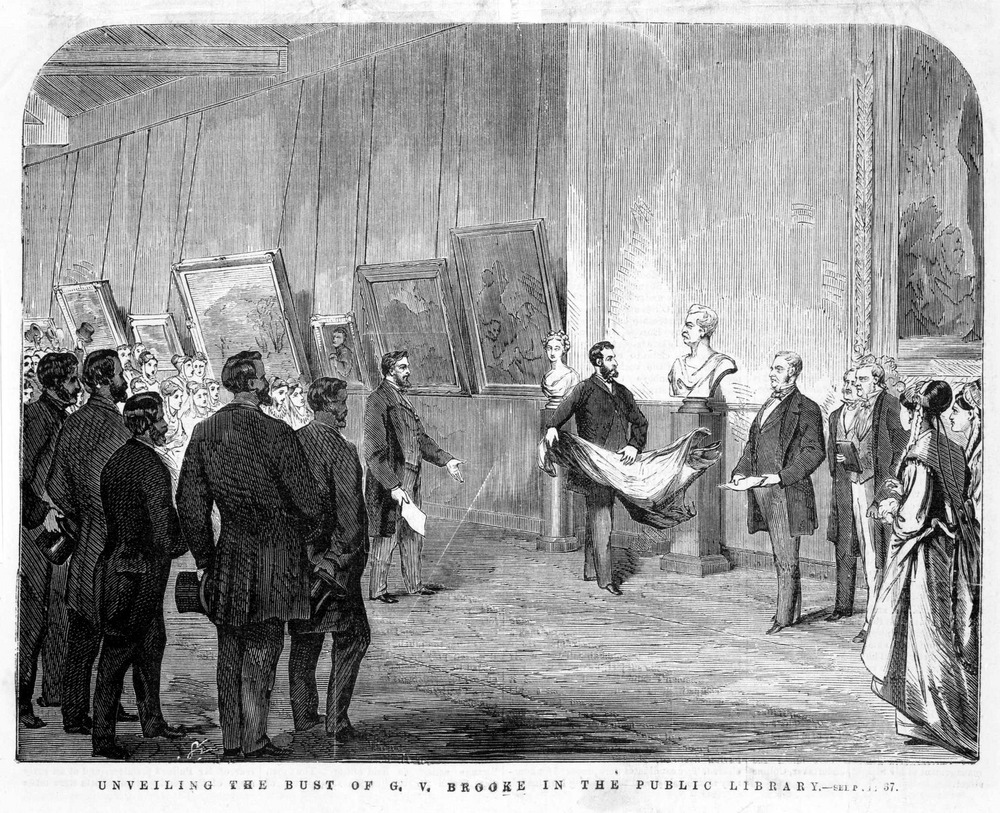 A variety of individuals combined in the early development of Melbourne’s art collections, including numerous donors, key library and NGV personnel and advisers on purchases, critics, and a number of practising artists. Most of them were British, Anglican, monarchist, and male, mirroring the broader character of colonial rule in Victoria.

The image reproduced above shows an exemplary event in the early history, the formal unveiling by Sir Redmond Barry of Charles Summers‘s bust of the recently deceased Shakespearean actor Gustavus Brooke, late in 1868. Influential local critic James Smith, closely involved with Barry in the formation of Melbourne’s art collection, and also a Shakespeare fan, played a significant role in the  commission of the bust.

The group of assembled worthies includes Barry and Smith, standing prominently to the right (with librarian Mr Tulk behind them?). A bust of Queen Victoria, a constant virtual presence in the Library during the period, although she never actually visited the state named after her, appears to the left of the suitably dramatic unveiler.

As is still the case with the modern NGV, donors played a crucial role in the early development of the collection, motivated (like many patrons of the past) by generosity, self-aggrandisement, or a combination of the two.

Early catalogues and annual reports acknowledged individual donors, and the 1905 NGV catalogue provided a useful index (pp.179-81), the standout name being that of Alfred Felton, largely on the strength of the group of works acquired under the terms of his will in 1904.

Felton is still regarded, obviously with good reason, as the gold standard among benefactors to the Melbourne collection, but he was preceded by several other major donors, including Dalgety and Fawkner in the 1860s, Sir William Clarke and George Collins Levey in the 1870s-80s, and so on.

Various artists also donated their own and others’ work, including James Scurry, John Mather, and E.L.Montefiore, the latter also acting as an adviser for a number of years.

Sir Redmond Barry was obviously a powerful force in the formation and early growth of the art collection, ably assisted by the first MPL librarian, Augustus Tulk. Both men were joined in 1863 on the Fine Arts Commission by other noted figures of day, including Archibald Michie, James Smith and Charles Summers, conferring with Sir Charles Eastlake on his recommendations for the first purchases of paintings for the Melbourne collection. Sir Henry Barkly, Victorian Governor when the library’s Art Museum was first planned and initiated, has also been shown to have been an important early influence.

From 1866 onwards, Alfred Taddy Thomson advised on purchases from London, and continued to do so until he resigned eventually in 1890 (although others, including John Ruskin, J.R.Herbert and Summers also acted occasionally as advisers in the 1870s). George Folingsby, NGV Director and Master of the Art School 1882-91, influenced shifting taste in Melbourne after Barry’s death, and he was instrumental in appointing Hubert von Herkomer as London adviser, leading to several notable acquisitions in the 1890s, particularly etchings.

John Longstaff, the winner of the inaugural NGV Travelling Scholarship in 1887, is a good example of an artist who also acted as a canny adviser on purchases, during his years in Paris (1887-95). British painter Sir Frederick Leighton advised on the purchase of contemporary ceramics in 1885, notably an important collection of tiles and pottery by William De Morgan.

Bernard Hall, appointed NGV Director and Art School head in 1892, continued in both posts until his death in 1935, by which time he had come to be seen, inevitably, as old-fashioned. But in his opening years he was responsible for several adventurous acquisitions, including paintings by Streeton, McCubbin and others, and the first Felton Bequest purchases in 1905. Hall also sought the advice of others during the 1890s and early 1900s, notably Joseph Pennell (drawings), and the Royal Academy (for British watercolours).

James Smith (already mentioned) and Marcus Clarke both played influential roles in the first decades of the Melbourne collection’s history.

More recent writers on the material covered here are listed in the Bibliography. However, π.ο., born in 1951, deserves special mention here for his remarkable re-interpretation of the NGV’s early history, in Heide (2019).

The linked entries below provide further details on the most significant donors and others mentioned in the present catalogue: