One of the early photographs of the Melbourne Public Library includes a particularly intriguing detail (reproduced above). Dimly visible in the background, presiding serenely over the carefully posed gentlemen at their desks, is a statue – not of Sir Redmond Barry, or Queen Victoria, or a Christian deity, but the Buddha.

This sculpture is documented as acquired for Melbourne in 1862, and listed in the 1865 catalogue of casts and statues, where it is identified as a wooden Buddha, or Sakya, from Rangoon, Burma. The statue is no longer in the collection, but it provides an intriguing insight into the taste informing Melbourne’s first collections, and is in fact one of a number of Asian works acquired or donated during the first two decades of the development of the library’s art collection. 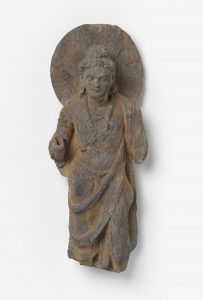 A 2nd-century CE Bodhisattva, dating from the heyday of ancient Gandhara (in present-day N/W Pakistan) appears to be the oldest Asian work acquired for the pre-Felton collection (NGV 52-D2A): see photo at right. It was donated by a Mr G.Eliot in 1875 (along with smaller Burmese and Indian objects). Other scattered Asian and Middle Eastern artefacts (Burmese, Pakistani, Turkish, Afghan and Persian) are listed among pre-Felton acquisitions, but these were apparently only modest in quality, e.g. a late 19th-century Burmese relief of Buddha calling the earth to witness (NGV 51-D1a), and only a few appear to be extant.

However, the main areas of pre-Felton Asian collecting were Chinese, Indian and Japanese, and by 1904/5 a substantial number of works had been assembled in each of these areas. Despite later losses and de-accessioning, many of these early acquisitions remain, some of high quality. These include smaller statuary, ceramics, and so on, as well as several groups of weapons and armour (still held in the NGV), although good examples of painting and sculpture would only be added to the collection after 1905, beginning with a notable group of Japanese woodcuts by Hokusai and others (Felton Bequest, 1909). Today, the NGV’s Asian collection has grown to a total of some 75,000 works, for which the early acquisitions provided a modest but important foundation.

Summaries and lists of examples follow, although it should be emphasized that these are provisional and incomplete at this stage (pending more systematic analysis of this material at some stage in the future). Works are listed in order of acquisition; the symbol # indicates works reproduced in the NGV’s online catalogue. 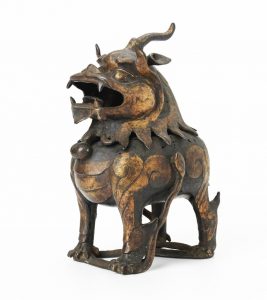 As former NGV Curator of Asian Art Mae Anna Pang noted in 1983, Melbourne’s collecting of Chinese art began in an era of widespread Western interest in such material. Several notable examples entered the collection soon after its formation, including a Qing dynasty plate donated by F.G.Dalgety in 1862, and a Ming dynasty incense burner, part of a group of works purchased in 1867 (photo at right). Various good jade and ceramic pieces were added after 1870, some of these apparently no longer in the collection.

The NGV’s current catalogue lists almost 1500 individual Chinese objects, most of them acquired after 1905, when more systematic collecting of Chinese art was initiated by Bernard Hall. 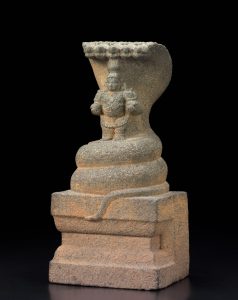 Various Buddhist and Hindu artefacts, as well as various domestic objects and weapons, generally recent in date, were collected in the pre-Felton era.

A large group of everyday objects and Hindu musical instruments was donated in 1881, from the 1880-81 Melbourne International Exhibition, by several benefactors including the Commissioner for India. At least two of the instruments (drums), are extant in the NGV (acc.no.345.a-b-D1A #), the donor identified in splendid detail in the gallery’s online catalogue as “the Rajah Surendra Mohun Tagore, Mus.Doc.; Companion of the Order for the Indian empire; Founder & President, Bengal Music School.” 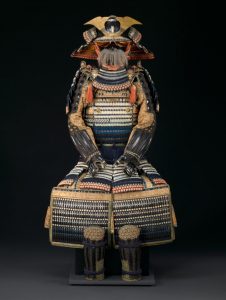 Japanese domestic and religious objects were acquired on a regular basis from the 1860s, many of recent date, including an unspecified number of pieces of “Choice Specimen Japanese Lacquered Work,” noted in the 1881 Annual Report as purchased from the Melbourne International Exhibition. Complete suits of armour dating from the Edo period (1603-1868) were acquired in 1888 and 1889 (see e.g.photo at right). Both are evocative of the samurai era, though by the 17th and 18th centuries that culture had become largely ceremonial.

In 1909, a remarkable group of woodcuts by Hokusai and others was purchased through the Felton Bequest, initiating the second phase of collecting in this field.

For the full photograph of Queen’s Hall (SLV H3971), see 1862 (or later) Queen’s Hall; many thanks to SLV librarian Gerard Hayes, for drawing my attention to the statue lurking in this image

For a good overview of the NGV’s Asian collection, see Pang Asian Art (2003); and for a detailed account of the growth of the Chinese Collection, see also Mae Anna Pang, An Album of Chinese Art from the National Gallery of Victoria, NGV, 1983, esp.pp.12-21