The inscription identifies the source as a painting already in the French royal collection under Louis XIII (via Cardinal Richelieu, 1642), previously thought to be by Domenichino, but now identified as the work of Spada, c.1615: see comparative reproduction below. It illustrates Virgil’s Aeneid II: 705-29, containing Aeneas’ account of his flight from Troy, carrying his father Anchises on his shoulders, and accompanied by his wife Creusa and son Ascanius.

For Audran, one of the most talented engravers employed by Louis XIV, see linked artist entry. 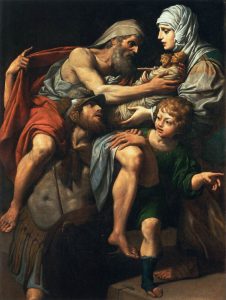 For the NGV impression, see https://www.ngv.vic.gov.au/explore/collection/work/37810/ (as by an unknown engraver after Domenichino; not reproduced)