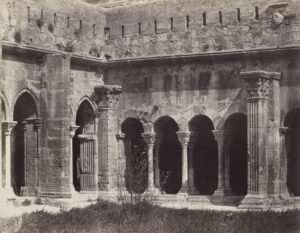 One of several albums purchased from the Architectural Photographic Association in the early 1860s, this collection comprised a group of photographs possibly shown together at the first annual exhibition of the Association in London in 1857. It includes views of Paris (including Notre-Dame), cathedrals in Amiens, Chartres, Rheims and so on, as well as other French and Belgian sites including Arles, Moissac, Rouen, Louvain and Ypres.

The majority of the prints are stamped as the work of the Bisson brothers (for details, see linked entry), with a few credited to Baldus, who is best known for very large prints produced by combining several different negatives. See also Bisson frères Switzerland and America {1860} SLV [PH].

SLV catalogue (including details as noted above, and reproductions); a contents list is held with the album