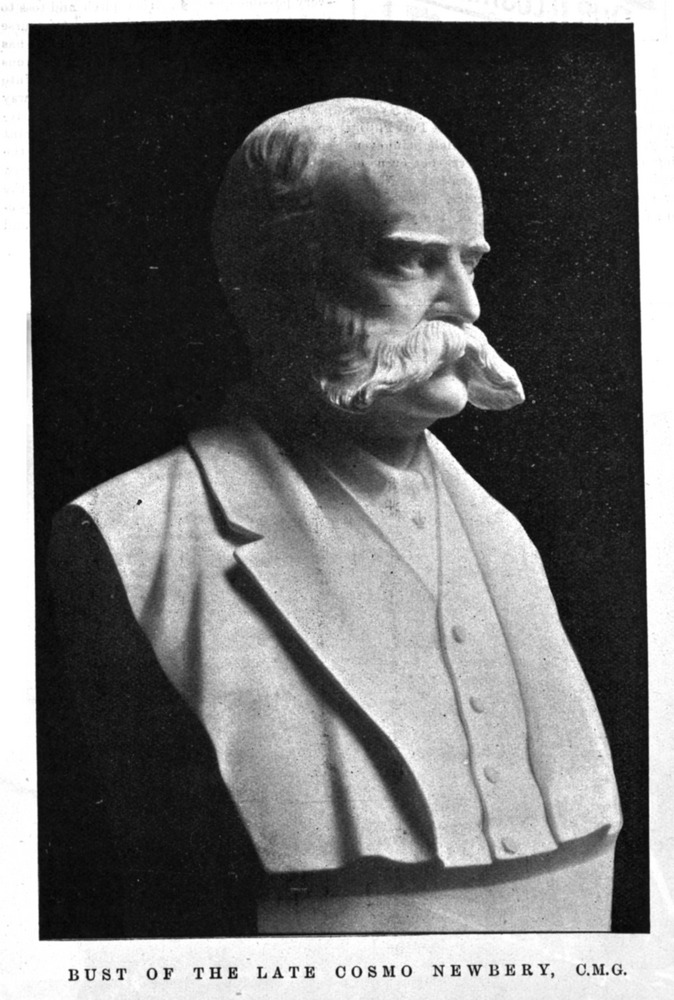 Newbery (1843-95), an industrial chemist by profession, was an acknowledged expert in mining technology and gold extraction. He arrived in Australia in 1865, and was appointed the first director of Melbourne’s Industrial and Technological Museum in 1870 (see note below).#

After his death, the Argus reported a meeting held to discuss a proposed bust to be placed in the Technological Museum, obviously the prelude to the production of this sculpture. The photograph shown here is in the State Library, which also holds several photos of the sitter himself, also sporting luxuriant whiskers. In October 2018, Museums Victoria advised that this bust is currently held in storage.

Two posthumous facts may be noted about the sitter.

Cosmo Newbery (also known as Yilka), a small town in the Goldfields-Esperance region of Western Australia, is named after him. The remote settlement, part of the registered area of the Yilka Native Title claim (WAD297/2008), was a Uniting Church mission for some years, before being returned to the local Aboriginal people in 1976.

More recently, a poet calling himself James Cosmo Newbery (apparently in response to his 19th-century precursor’s extraordinary name), has been active as an internet blogger since about 2006.

# The Industrial and Technological Museum, later known as the Institute of Applied Science, was housed in the Public Library building until its centenary in 1970, when it was renamed the Science Museum of Victoria, and relocated to the spaces previously occupied by the National Gallery of Victoria (which had moved to its new premises in St Kilda Road in 1968). In 1992, the science and technology collection, renamed Scienceworks, moved to its present site in Spotswood.

Many thanks to Lorenzo Iozzi of Museums Victoria for confirming that the present bust is extant, and providing an ID photo (email correspondence, Sept.2018). The photo shown here (published in the Illustrated Australian News in 1896), is in the SLV (acc.no.IAN01/02/96/4); see also SLV catalogue for further photos of the sitter. See also “The Late Mr J.Cosmo Newbery: A Proposed Memorial,” The Argus, 15 June 1895: available online as https://trove.nla.gov.au/newspaper/article/9362630 (accessed 24 September 2018)

For the town of Cosmo Newbery, also mentioned in the ADB biography cited above, see https://en.wikipedia.org/wiki/Cosmo_Newbery_(Yilka) (with further references); and for the poet-blogger mentioned, see e.g. http://jcosmonewbery2.blogspot.com/2006/ (both websites accessed 6 July 2020)