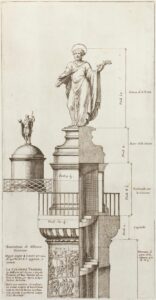 Trajan’s column was constructed in Rome in 113 AD to commemorate the emperor’s  victory over the Dacians (in modern Romania). The topmost figure of St Peter was added in the late 16th century by Pope Sixtus V; the original crowning effigy of Trajan was mislaid in the Middle Ages.

This book provided the first complete published record of the column, particularly notable for its continuous narrative frieze. The 199 engravings were produced on the basis of casts commissioned in 1669 by Louis XIV, who financed the erection of scaffolding for the purpose, and to whom this book is dedicated. Explanatory texts by Bellori are included in the book.

Bartoli worked in Rome, and produced prints of many Roman monuments, including Nero’s Domus Aurea, which he excavated (c.1660).

For the plaster cast of Trajan formerly in the Melbourne collection, see Casts – II.Busts & heads (II.123).

[photo: engraving showing the top of the column, from copy of Bartoli’s book in the RA (c)]