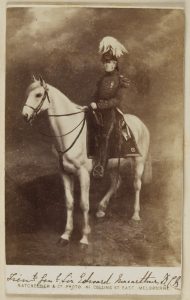 This collection of photographs, assembled on the initiative of Redmond Barry, has been described drily by Christine Downer (2000) as “a record of the old boys’ network which had ruled Victoria since its separation from New South Wales in 1851.”

The title has its origin in the ancient Roman Fasti Annales (recording the names and achievements of Roman consuls and magistrates), pointing directly to the classicizing aspirations of Barry and his contemporaries.

This series was followed shortly afterwards by the more ambitious “Oval Portrait” series. A number of photographs used for both sets of portraits were taken by the successful Melbourne photographic firm of Batchelder & Co.

Not listed in the early NGV catalogues or acquisition records

The SLV catalogue notes that this series was transferred from the La Trobe stacks in 1986, and then via Manuscripts to the Library’s Picture Collection in 1992. Refer individual entries: e.g. for the photo reproduced above, see http://search.slv.vic.gov.au/permalink/f/cjahgv/SLV_VOYAGER1719593. However, many of the photographs are not yet available online