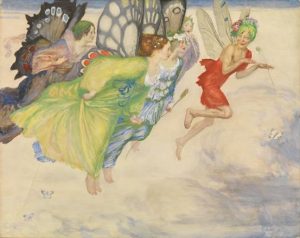 This typical Victorian/Edwardian fairy image, comparable for instance with the well-known illustrations of his contemporary Arthur Rackham (1867-1939), somehow escaped the attentions of those determined to cull Victoriana from the NGV during the 1940s and early 50s.

Bell, who taught in Liverpool, Glasgow and London, and was elected to the RA in 1922, painted religious and other works, and designed mosaics for Westminster Cathedral and the Palace of Westminster during the 1910s and 20s.

The present work was one of several selected for Melbourne by the Royal Academy from the 1901 exhibition of the Royal Society of Painters in Water-Colours (see also Brockbank In the Cornfield {1901} NGV [WT] etc.).