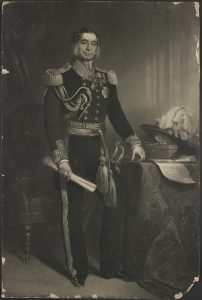 This engraving, recorded by the SLV as donated in 1872, was presumably one of the two portraits of Fitzroy included in the list of colonial governors in NGV 1894, the other apparently being from the Public Library’s “Oval portrait” series (no.28).

Both this engraving and his oval portrait were based on the 1855 oil portrait of him (Government House, Sydney), the first significant London commission given to Buckner, who went on to a successful career as a portrait painter.

Bellin was a noted reproductive engraver of the period.

Only one portrait of Fitzroy is listed in NGV 1905, presumably the oval portrait produced in 1866 by Johnstone, O’Shannessy & Co. (for details and a reproduction, see SLV online catalogue: H5297), also listed in NGV 1894, as noted above. For Fitzroy, see http://adb.anu.edu.au/biography/fitzroy-sir-charles-augustus-2049 (biography by John M.Ward, published in ADB vol.1, 1966)