Benzoni’s Roman workshop generated replicas of many of his statues, including several sets of busts of the Seasons. The donor may have been the Peter Davis recorded as Mayor of Melbourne, 1856-57.

Melbourne’s busts were presumably comparable with other examples documented recently, such as a complete set auctioned by Christie’s in London in 2007 (from the collection of Giorgio Marsan & Umberta Nasi): see comparative photo below. Melbourne’s Winter, identifiable in the background of one of Nettleton’s 1872 photos of the temporary Picture Gallery (SLV H96.160/1793), looks similar to an 1865 variant auctioned in London in 2014. 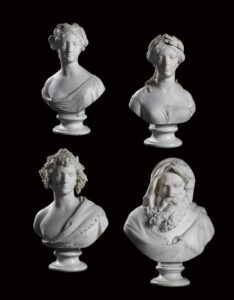 The NGV’s Stock Book, describing these works as “Idealities,” notes that all four were de-accessioned and presented to Mildura by order of Daryl Lindsay and the Trustees in February 1943. Anna Barricelli, in her entry on Benzoni in the Dizionario Biografico degli Italiani (1966), adds that the statues were subsequently auctioned in 1952. Further research may indicate their later fate.

[comparative photo: another set of busts of the Seasons by Benzoni, c.1850, auctioned in 2007]

See http://www.treccani.it/enciclopedia/giovanni-maria-benzoni_(Dizionario-Biografico)/ (biography by Anna Barricelli, originally published in 1966: as noted above; accessed 25/9/18); and Bénézit 2, pp.192-93 (listing the statues as still in Melbourne). For other Benzoni busts of the Seasons, see e.g. https://www.christies.com/lotfinder/Lot/a-group-of-four-italian-carved-white-5025418-details.aspx (the compete set auctioned by Christie’s on 12-13 Dec.2007, as reproduced here; heights given as 74 cm [male], 67 cm [female]; set sold for £42,500); http://www.sothebys.com/content/sothebys/es/auctions/ecatalogue/2014/19th-century-sculpture-l14232/lot.43.html (Winter 1865, as auctioned in 2014; also mentioning the Melbourne set); and http://www.invaluable.com/auction-lot/giovanni-maria-benzoni-italian,-1809-1873-105-c-yzmwo10kqu, bust of Spring, signed and dated 1851, from an Italian private collection, auctioned by Sotheby’s, London, July 2004 (with photo)

For Peter Davis, see e.g. https://en.wikipedia.org/wiki/List_of_mayors_and_lord_mayors_of_Melbourne (accessed 10 Oct.2020); further information has yet to be found