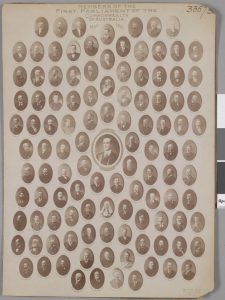 This series comprised individual photos of all 112 members of the inaugural federal parliament, and a composite photo of them surrounding a larger central image of the first Governor-General of Australia, Lord Hopetoun.

The set held in the SLV is described in the library’s online catalogue as having been transferred from the Victorian Patents Office in 1908; hence it must remain uncertain whether it was identical with the series catalogued in NGV 1905. The composite photo is reproduced here (the SLV catalogue also includes reproductions of the individual portraits).

To date, all that can be discovered about the photographic firm involved is that it was based in Melbourne. There was also a portrait of Lord Hopetoun in the Public Library’s Oval Portrait series.