The NGV’s annual report for 1872 records the purchase of a watercolour of “Australian Flowers” by “Miss Blythe”, and four works ascribed to the same artist are listed under 1872 in the NGV’s unpublished record of early acquisitions (PF), identified as “Wildflowers from Port Arthur/Bream Creek/Mount Wellington” etc..

“Miss Blyth,” usually identified as Eliza Blyth (details as shown above), is documented as a painter and art teacher in Hobart from c.1855-78. She was awarded a medal for the watercolours of Tasmanian flowers she showed in the 1866 Intercolonial Exhibition in Melbourne, and she also exhibited flower paintings in Melbourne and Sydney in the mid 1870s.

The album exhibited in 1866 was auctioned by Mossgreen in London in 2012; it comprises some 21 illustrations, all initialed EB and dated variously 1862ff., including the example reproduced below. Other examples are held in the Ballarat Art Gallery and elsewhere. 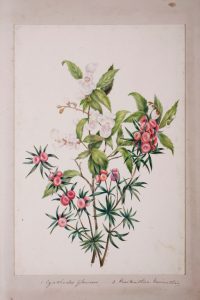 The four works listed appear in PF (acc.nos.p.166.1-1 to 4-1): medium not noted; however, nothing relevant seems to be listed in the current catalogues of either the NGV or SLV


For the album exhibited at the 1866 Inter-colonial exhibition, no.560,  see https://www.findlotsonline.com/auction-lot-details/55033/ (accessed 13 March 2020): Mossgreen auction at Clarendon House, London, 15 April 2012, lot 23: with further details and reproductions, including the page shown above: watercolour, signed and dated EB Feb 65; size given as 27 x 18 cm

For Eliza Blyth, see Kerr Dictionary (1992), p.75, and DAAO (also including information on Sarah Blyth). Other botanical illustrations attributed to her are reproduced on the website Australian Botanical Illustration (https://www.anbg.gov.au/plantinfo/illustrations-index.html, accessed 13 March 2020); other examples were apparently included in the exhibition Capturing Flora: Australian Botanical Art 1700-1900, held at the S.H.Ervin Gallery, Sydney, in 2013 (refer gallery website)