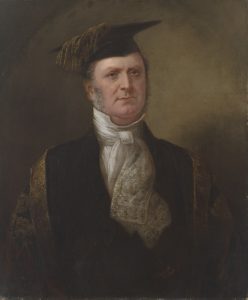 This portrait of Barry, the key figure behind the founding of the Public Library of Victoria and the NGV (see linked entry), appears to be closely related to the portrait commissioned from George Folingsby by the University of Melbourne in 1879, but only completed in 1881, after Barry’s death (University of Melbourne Art Collection).

Folingsby’s portrait shows Barry in his ceremonial robes as the first Chancellor of the University (1853-80). It remains unclear whether the present work, in which Barry wears a mortar board and academic gown, predated Folingsby’s canvas.

Botterill, who appears to have worked mainly as a professional photographer, was one of the main contributors to the “Oval portrait” series initiated by Barry himself in 1866.