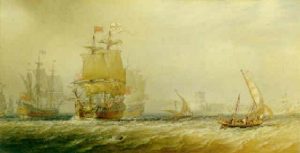 This work was bought after being shown at the Melbourne International Exhibition in 1881.

Sir Oswald Brierly, noted in NGV 1894 as marine painter to Queen Victoria (a position he assumed in 1874), specialized in water-colours, and was a member of the RWS. Earlier in life, he visited New Zealand and New South Wales, and several of his impressive water-colour seascapes are held in the Art Gallery of New South Wales.

Mallalieu observes that while Brierly’s “paintings of contemporary marine subjects can be fine and atmospheric,” his later historical images are less substantial. The subject here is a skirmish in Portugal, at the end of the English Civil War, between Cromwell’s fleet and a small Royalist group led by Charles I’s nephew Prince Rupert.