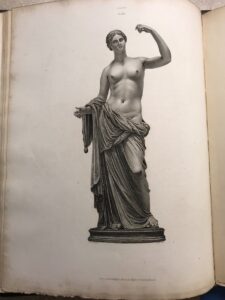 The SLV now holds a complete copy of the 11 parts of this set (1812-61), identified (by bookplates) as presented to the MPL by the Trustees of the British Museum in May 1864; it appears that these volumes may have replaced those acquired in 1859.

The series constituted a systematic early record of the BM’s antique sculpture collection, including the sculptures acquired after the death of antiquarian Charles Townley (1737-1805), and the Elgin Marbles (transferred to the British Museum in 1816), reproduced through engravings based on drawings by William Alexander (1767-1816) and Henry Corbould (1787-1844). Engravers included Charles Picart (c.1780-1837).

Part I (1812) included a number of the more important Townley sculptures (such as the Venus reproduced here), and Parts VI-VIII (1830-39) covered the Parthenon sculptures acquired by Elgin (pediments, metopes and frieze).

A number of the sculptures and reliefs reproduced formed the basis for  copies acquired for the Melbourne collection from 1861 onwards: for details, see Plaster Casts.