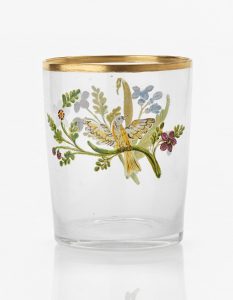 Pre-Felton acquisitions with decoration attributed to the Brussa workshop included:

The two objects listed above, both with enamel decoration in the style for which Osvaldo Brussa and his son Angelo were well known during the 18th century, formed part of the collection of Murano glass acquired for the NGV in 1871: see Unknown Venetian glassmakers [DA].

Geoffrey Edwards (1998), reproducing other related examples also acquired for Melbourne in 1871, observes that while works from the Brussa workshop demonstrated some finesse, they also exemplify a period during which Murano glassmaking was in the doldrums.

Other pieces decorated by Brussa are held in the V&A, Metropolitan Museum etc., and his portrait, holding a characteristic piece, is in the Museo Vetrario, Murano.

Refer NGV catalogue for the pieces listed above (both illustrated). See also Edwards, Art of Glass (1998), pp.68-69 (reproducing other NGV examples from the same period)