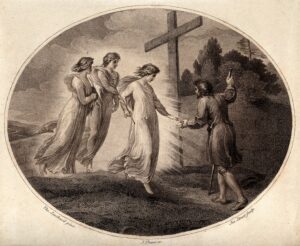 Stothard (1755-1834), elected a full member of the Royal Academy in 1794, was a prolific illustrator of books and poems. His illustrations to Bunyan’s masterpiece first appeared in the form of a series of small paintings (1787), subsequently engraved (1789).

The present edition, listed in the 1857 MPL catalogue, no longer appears to be in the State Library; copies held elsewhere list 17 engravings after Stothard (and additional woodcut initials by S.Williams). However, the SLV does hold an 1867 edition of Bunyan’s select works (comprising The Pilgrim’s Progress and other texts), illustrated by 100 engravings and chromo-lithographs after Stothard and others.

According to Sarah Symmons (1984), Stothard’s images were “the first illustrations to Bunyan’s story ever made.” Symmons notes that they apparently influenced John Flaxman’s Bunyan illustrations, produced in Italy and completed in c.1792, adding that the two knew one another from student days, but that Stothard was later dismissive of Flaxman’s series.

[photo: Christian saluted by three shining ones at the cross (J.Strutt after Southard) (Wellcome Library no.31331i)]

The 1840 edition is available via Google Books; for the engraving reproduced here, see https://wellcomecollection.org/works/v57cjsg4/items?langCode=lat&canvas=1.

Cf. The select works of John Bunyan…, Glasgow, Edinburgh & London: William Collins, 1867, illustrated by small wood engravings and a series of coloured variants of Stothard’s originals (SLV RARE SF 823.4 B88P). It may have been decided to replace the 1840 book with this later volume, which is inscribed with a dedication to the original owner in 1874, evidently a terminus post quem for its acquisition for the MPL