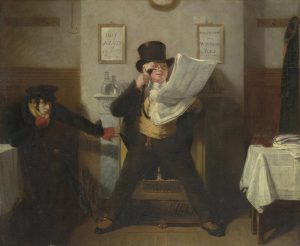 The artist made his name with illustrative images like this. Indeed, as NGV curator Ted Gott observes, Buss was engaged during the 1830s to produce illustrations for Dickens’ Pickwick Papers, and remained an admirer of the novelist throughout his life.

Michie, Victorian Agent-General in London at the time, arranged the purchase of this work in London for a modest sum, having previously donated other works to the Melbourne collection (for details, refer linked entry).