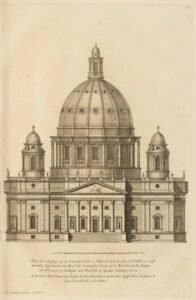 Campbell’s book, originally published in three volumes (1715-25), has been called a “manifesto of English Palladianism” (Connor 1977), although it actually ranges widely, from Inigo Jones to Wren and Hawksmoor.

Lavishly produced, it comprised some 500 large-scale engravings of major buildings and projects, including Campbell’s own designs. A significant architect in his own right, he designed the main façade of Burlington House [1717], and various other buildings in London and elsewhere. Volume I commences with a plan and elevation of Wren’s St Paul’s followed by comparative images of St Peter’s, Rome, and Campbell’s own project for a grand church in London (reproduced here).

The text is in both English and French, and the scale and grandeur of a number of the plates, some of them in folded double-page format (e.g. of Greenwich Hospital, Blenheim etc.) bring to mind the spectacular engravings of the architecture designed for Louis XIV in the previous century: see e.g. Marot (J.) Plans and elevations of the Louvre 1676/78 {1879} NGV [PR].

Volumes 4 and 5 of the present book, by Woolfe and Gandon, published later (1767 and 1771), extended Campbell’s original study with engravings of more recent examples.