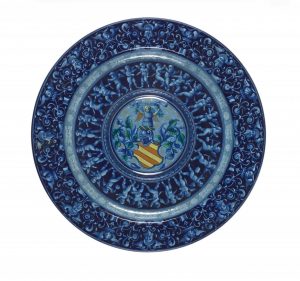 The pieces listed above included two “wall reliefs” of the Madonna and Child in the manner of the Della Robbia family. The plates and jugs are decorated with grotesques and other traditional Tuscan motifs.

Several other Cantagalli pieces (no longer extant) may also have been purchased in 1897.

Other examples are held in the V&A.

For the works noted above, all with reproductions, see https://www.ngv.vic.gov.au/?type=collection&s=Cantagalli. They are all noted in the NGV’s unpublished pre-Felton acquisitions list, along with several other works possibly also by Cantagalli but no longer in the collection