This pair of figures was first listed in the 1865 NGV catalogue. In NGV 1894, they are catalogued as by A. Carrier, and hence were probably early works, since the sculptor signed himself in that style prior to 1868, thereafter using his full name. 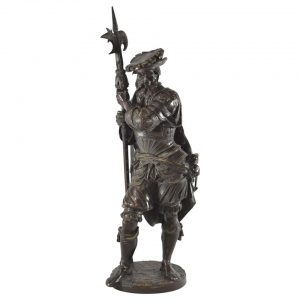 Comparable bronzes by the artist appear occasionally on the international market, including a “lansquenet with halberd” and an armed soldier, apparently a pair, recently on the US art market.

The donor of the present pair was presumably John King (1820-95), the oldest of three brothers who ran cattle in Gippsland; they were descended from Philip Gidley King, NSW Governor 1800-1806.

The comparative works noted, measuring 57.12 and 45.72 cm high respectively, are listed as available from a US seller for just under A$4000 each: https://www.1stdibs.com/creators/albert-ernest-carrier-belleuse/furniture/decorative-objects/sculptures/ (accessed 26 Sept.2018).