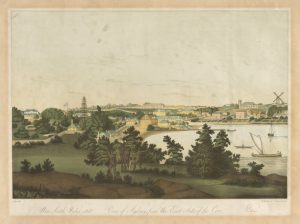 The two prints catalogued in NGV 1905, which form a continuous view, may be identified tentatively as from the set of four views of Sydney first published in London in 1810, re-issued as chromolithographs by William Dymock in Sydney in 1884, and held in the SLV. However, the SLV’s prints are catalogued as accessioned in 1938, and some of the details vary from those listed in NGV 1905, which may have been from a different set.

Eyre was transported to Australia as a convict in 1801, was pardoned in 1804, and worked as a topographical artist in Sydney until he left in about 1812 (not recorded thereafter). Examples of his work are held in the Dixson Library and elsewhere.

Clark, known as an aquatint engraver and landscape painter, worked mainly in London. His biographical dates vary somewhat in different sources. The NGV holds further prints made by him in association with the engraver Matthew Dubourg, acquired in 1993.