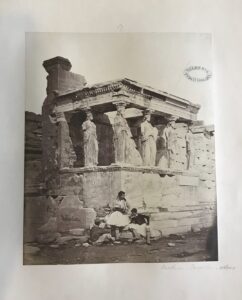 One of the albums of photographs acquired for Melbourne in the early 1860s, this is inscribed on the spine as comprising photos by “Clifford, Robertson & Beato” (and also described thus in the 1865 Melbourne catalogue). It includes views of Seville and other Spanish cities, Athens, and Constantinople. The SLV notes that 12 photographs are signed by Robertson alone (including the print shown here), and 5 by Robertson & Beato.

The views of Spain were presumably taken by Clifford, documented as active from 1852 until his death in Madrid, where he served as court photographer to Queen Isabella. He was also commissioned to take several portrait photographs of Queen Victoria in 1861.