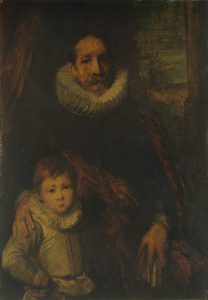 This second copy arising from Coates’ 1896 scholarship, also now in poor condition (like Coates after Correggio Marriage of St Catherine {1899} NGV [PA]), was also based on an original in the Louvre, van Dyck’s charming portrait of a bearded man with his young son, dating from c.1618-19.

According to the Louvre, the man represented in van Dyck’s painting may simply have been an unidentified Antwerp citizen. The former identification of him as Jean Richardot (1540-1609), who held high office in the Hapsburg Netherlands in the later 16th century, seems incompatible with the fact that he died when van Dyck himself was aged only about 10.

For the identity of the figures in van Dyck’s painting (Paris, Louvre, inv.1244; 115 x 82 cm), see http://cartelen.louvre.fr/cartelen/visite?srv=car_not_frame&idNotice=8772&langue=en (with reproduction). For Richardot, see e.g. http://en.wikipedia.org/wiki/Jean_Richardot: he was president of the privy council of the Emperor Philip II; his son William lived from 1579-c.1638