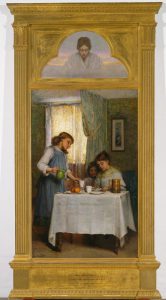 Coates’ receipt of the Travelling Scholarship in 1896 resulted in three works for the pre-Felton collection, all still in the NGV: this finely-crafted domestic “altarpiece,” and two copies after Correggio and van Dyck: see separate entries.

The present work appears to be in much better condition than the two Old Master copies – perhaps because they were sent back to Melbourne earlier and/or less carefully?