This work was shown in the 1880 International Exhibition in Melbourne and purchased from the Commissioner for Belgium. The artist apparently specialized in realist images of the daily life of fisher-people. 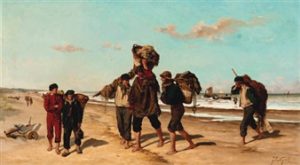 [comparative painting by Cogen: The returning fishermen (auctioned in 2000)]