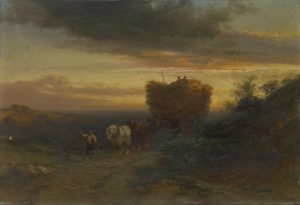 This lugubrious landscape is listed in the 1875 and 1894 NGV catalogues, but not in NGV 1905 (suggesting it was not then on display).

The entry in NGV 1894 accords the artist rather faint praise (“apprenticed to a ship painter, his success in executing several large canvas advertisements for the proprietor of a travelling circus induced him to adopt art of a higher kind as a profession”), while noting that he became Vice-President of the Society of British Artists in 1878.