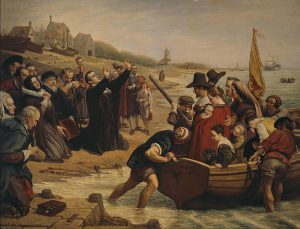 As the early NGV catalogues emphasize, this is Cope’s original version for the new Houses of Parliament in Westminster, later replaced by a replica in fresco to minimize reflections (the sequence of events is explained in the artist’s memoirs).

The canvas was praised when shown at the Royal Academy in 1857, and subsequently recommended for Melbourne by Eastlake.

Both the 1875 and 1894 NGV catalogues include lengthy quotes from minister John Robinson’s account of the pilgrims’ embarkation in 1620. This image of travel from England to a distant new land struck a chord with at least one early NGV visitor, William Sandover, who described the work in empathetic terms in a letter written in 1876 (quoted in Carter 2000).

For further details on Cope’s canvas, see Galbally First Collections (1992), cat.no.2, pp.43-44 (including a quote from Cope’s posthumously-published Reminiscences [1891]). An excerpt from Sandover’s letter is published by Jennifer Carter, Eyes to the Future: Sketches of Australia and her neighbours in the 1870s, Canberra: NLA, 2000, p.204 (available via Google Books)