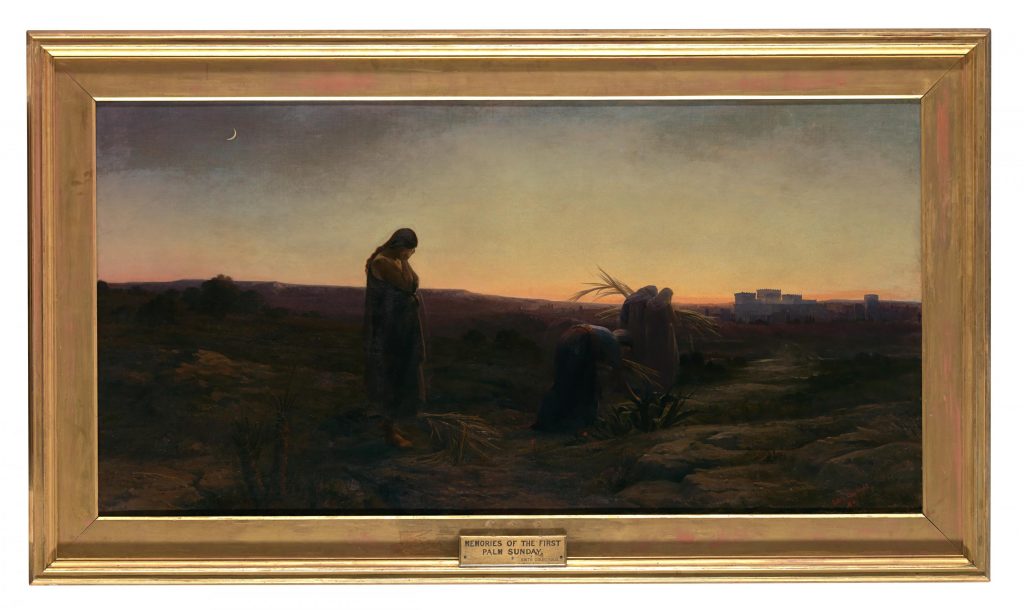 The artist was the niece of wealthy mill-owner Samuel Courtauld (1793-1881), whose great-nephew, also named Samuel, later founded the Courtauld Institute (1932).

This canvas, signed Edith Courtauld, was shown at the Royal Academy in 1871, where it made her reputation. It was selected for Melbourne by Herbert, with whom she studied.

The first part of the artist’s career was spent in Egypt, where she married Adolph Arendrup, a Danish military officer (1834-75), in 1873. After his death in the Ethiopian-Egyptian conflict of 1874-76, she settled in London in 1877. A devout Roman Catholic, she became the principal patron of the Sacred Heart Church, Edge Hill, Wimbledon, built in neo-Gothic style, 1887-1901.

The NGV catalogue entry cites the RA exhibition, and comments on the original frame

For the artist, see Bénézit 1, p.649 and AKL 5, pp.19-20 (both under Arendrup); and http://www.sworder.co.uk/index.php?_a=viewProd&productId=35117 (auction catalogue entry). For further information noted here, see https://da.wikipedia.org/wiki/Adolph_Arendrup; https://en.wikipedia.org/wiki/Ethiopian–Egyptian_War; https://genealogy.links.org/links-cgi/readged?/home/ben/camilla-genealogy/current+%210%3A142138+2-2-0-1-0 (for the artist’s father John Minton Courtauld [1807-77], and other relatives); and http://en.wikipedia.org/wiki/Sacred_Heart_Church,_Wimbledon