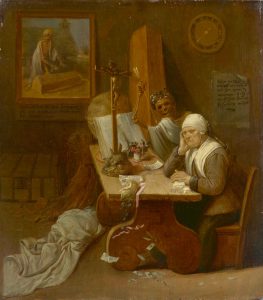 When it was purchased, this small panel was attributed to the Dutch Golden Age artist Cornelis Bega (c.1631-64). This opinion persisted until 1961, when Ursula Hoff, objecting that the picture bore no real similarity to Bega’s work, catalogued it as “Dutch School, 18th-century?” This view remained in place in Hoff’s subsequent NGV catalogues.

However, more recent scholarly opinion has led the NGV to assign the work to Craesbeeck, a Flemish genre painter close to Adrian Brouwer (1605-38).

As with many moralizing images of this type, the imagery may be read in several ways. The woman – surrounded by cards, money, a crucifix, a coffin, and so on – is apparently about to be claimed by a jaunty Death, wielding a large arrow. According to the NGV, the inscription behind the woman’s head reads, in translation, “No bird, flesh or fish has ever dodged it; they don’t miss shooting.”

For this work, see Hoff (1995), p.91: as Dutch, 18th century (Death and the Fortune-Teller), with further references, including Hoff’s 1961 NGV catalogue. The translations of the inscriptions, and the interpretation of the image at upper left as a view through a window, appear in the caption accompanying the work in NGV International, 2019