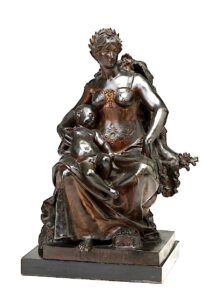 This work is described as a replica in the NGV’s stock-book, the 1891 Annual Report, and the 1894 NGV catalogue. The original statue, shown at the 1884 Salon, was later at the Hotel de Ville, Paris.

Another gilt bronze statuette based on the same group, dated 1890, was on sale recently in Los Angeles.

The NGV catalogue lists this work as “School of Delaplanche.”