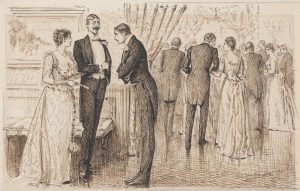 This drawing and Du Maurier A Connoisseur 1891 {1892} NGV [DR], both made for Punch, were chosen by Hall from the 1892 Anglo-Australian Exhibition, Melbourne.

Inscriptions below the image (which is signed at lower right) provide the date, and the accompanying Punch dialogue: ‘Digby: “I had hoped for the pleasure of taking you down to supper, Mrs Masham!” / Rigby: “Too late, dear fellow, it’s the early bird that catches the worm!”‘ (the lady apparently had nothing to add to this brilliant repartee).