* Duckett Design for the Seal of the Melbourne Public Library {1868} Loc? [DR] 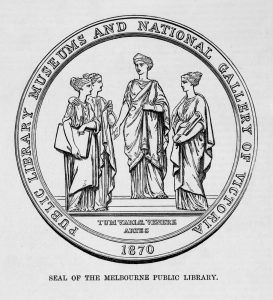 Duckett’s drawing was  commissioned by Augustus Tulk, on behalf of the Library. The artist is recorded as being disappointed that “the trustees do not intend to have the expense of engraving it” (quoted by Lennon, in Kerr 1992).

The SLV holds a red wax copy of the seal, dated to 1870, but the original drawing does not appear to be extant. A wood engraving based on Duckett’s design was published in The Illustrated Australian News for home readers, Dec.5, 1870 (reproduced here).

Duckett trained with his sculptor-father and then at the Royal Academy, before migrating to Australia early in 1866 for reasons of health (he was consumptive). Apparently a talented draughtsman, he was befriended by von Guérard, whose portrait medallion he made and exhibited at the Intercolonial Exhibition in Melbourne in 1866. However, dispirited by the lack of opportunities in Melbourne, he relocated to Launceston and then to Sydney, where he died in April 1868, aged only 29.