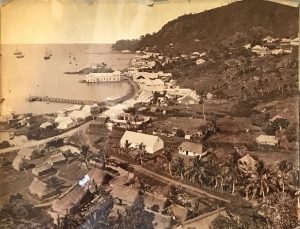 Francis Herbert Dufty (1846-1910) and his brother Edward (1850-97) were active in Levuka and elsewhere in Fiji during the 1870s and 1880s in particular. They were members of a remarkable family of British and Australian photographers documented from 1819 through to 1973.

The present group of photos, titled in pencil on the back of each print, shows various landscape views, group portraits of native inhabitants etc. Each is blind stamped DUFTY BROS / LEVUKA / FIJI, and stamped on the reverse with the Melbourne Public Library stamp and the date 15 August 1889.

They may be identical with a group of “Photographic portraits and Views from Fiji Islands,” listed in the NGV’s Annual Report for 1873 as donated by J.S.Butters, but without any indication of the photographer/s involved.


General information on the Dufty Brothers is contained in the SLV catalogue. See also Kerr Dictionary (1992), pp.225-26 (article on F.H.Dufty, noting that he was also documented in Kyneton and Melbourne, 1866-69); AKL 30 (2001), pp.379-81, providing details for other members of the family (with further references); http://www.justpacific.com/fiji/fijiphotos/dufpics/; Brigitte d’Ozouville, “Reading photographs in the colonial era: a case study from Fiji, 1872,” Pacific Studies vol.20, no.4 (Dec.1997), pp.51-76, available online (discussing an album by F.H.Dufty in the Mitchell Library, Sydney); and Sandy Barrie, Australians behind the camera, directory of early Australian photographers, 1841-1945 (2002)