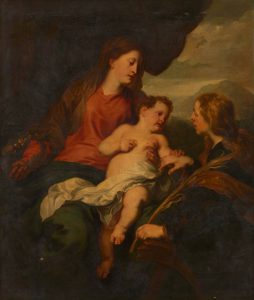 This work, bought in London, is a replica of the original canvas in the British royal collection (c.1622-29).

The 1894 NGV catalogue suggested that the Melbourne canvas was painted by one of van Dyck’s pupils, and Cox (1970) called it an “old copy.” Ursula Hoff was less enthusiastic, simply describing it as “after van Dyck” in her 1995 catalogue of Old Master paintings in the NGV; however, the work is listed in the NGV’s current online catalogue as dating from the 17th century.

The varnish on this picture is heavily yellowed, presumably making it more difficult to reach definitive conclusions about the work’s quality and probable date.