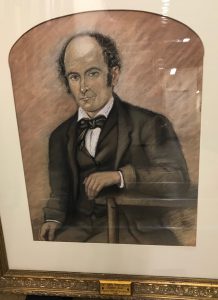 This rather awkward-looking image is identified in the inscription at the base of the frame as a portrait of “Capt.John Spotswood settler near present site of Spotswood 1839.” The 1894 and 1905 NGV catalogues confidently call it “a chalk drawing by Eglesworth and Binns”; and the SLV catalogue describes it as by “Egglesworth V Binns.”

In fact, though, as SLV librarian Gerard Hayes has pointed out, the authors were presumably Wrigglesworth & Binns, a photographic partnership documented as active in Wellington, Christchurch and Dunedin (Spotswood’s family also had connections with New Zealand). Hayes suggests that the drawing was probably made over a photographic matrix, and that a monogram at the lower right, next to the photographers’ names, comprising the initials THP (?), may be that of the pastellist.

The sitter (1809-51) settled the Melbourne suburbs of Williamstown and Spotswood. Seddon, named as the donor in NGV 1894 and 1905, was apparently his son-in-law.

See SLV online catalogue (as by Egglesworth V.Binns; not reproduced); ID photo shown here taken by the author (July 2019). Gerard Hayes makes the points noted above in an email (also July 2019), and compares a studio photograph of a child by Wrigglesworth & Binns (SLV H86.98/51, dated c.1871-1890)