The NGV 1905 catalogue advises that this canvas was purchased from the 1880 Melbourne International Exhibition.

The painter, whose biographical details are listed in NGV 1894 (noting his appointment as professor at the Berlin Academy in 1881), appears to have specialized in marine landscapes: comparative example reproduced below. 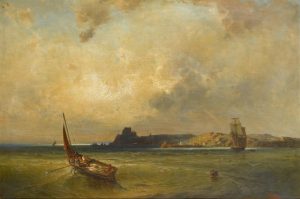