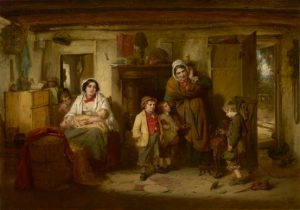 Discussing examples of Victorian narrative painting by Folingsby and others, Australian critic John McDonald recently derided works like this as “potboilers.” But many modern viewers have rediscovered a taste for this genre, the combination of social comment and sentimentality bringing to mind the contemporary writing of Charles Dickens and others.

Specifically, this work was inspired by the eponymous poem by Scottish writer William Thom (1799-1848), quoted in NGV 1894 (“… In their dark hour o’ anguish the heartless shall learn / That God deals the blow for the mitherless bairn”).

In the catalogue of the “Auld Land Syne” exhibition held in Ballarat in 2014, Alison Inglis reproduces a cartoon from the 1892 Illustrated Australian News, showing “an old-fashioned Scotch couple” studying Faed’s work intently, the woman declaring “Ma certes, he was the clever chiel it pentit that.”

Inglis also points out that, as late as 1935, Faed’s similarly-staged Reading the Bible (1845-6) was donated to the Geelong Art Gallery by a “staunch Presbyterian,” suggesting the continuing appeal of traditional imagery to members of the expatriate Scottish community in Australia, well into the 20th century.