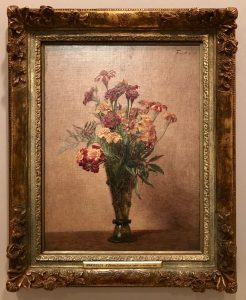 This modest still life, shown in the Anglo-Australian Exhibition staged in Melbourne in 1892, was one of the first works purchased on the Hall’s advice, shortly after he took up his appointment as NGV director.

The artist, also a noted portraitist, specialized in flower paintings. His earlier, more colourful Dahlias (1863) was an early Felton Bequest purchase, in 1906.