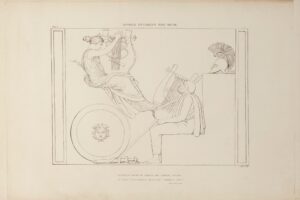 The spare linearity of these compositions – and others after Flaxman also acquired for the MPL in the 1850s: see e.g. Flaxman (after) Compositions from the Odyssey of Homer 1805 {1857} SLV [IB] – was widely influential during the 19th century: see now linked artist entry for further details.

For reproductions of the Royal Academy copy, see https://www.royalacademy.org.uk/art-artists/book/the-iliad-of-homer-engraved-from-the-compositions-of-iohn-flaxman-r-a; and for further details on the drawings and prints, see https://www.royalacademy.org.uk/article/how-to-read-it-flaxmans-iliad-odyssey (article by Annette Wickham, last updated Aug.2020) (sites accessed 3 Dec.2020)