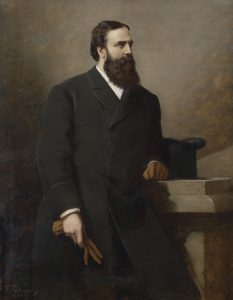 Lyster (1821-80), a theatre and opera impresario, was born in Ireland; he first came to Melbourne with his troupe in 1861, and subsequently performed extensively in Australia and beyond. The outer Melbourne suburb of Lysterfield is named after him.

Folingsby painted this posthumous portrait from a photograph.