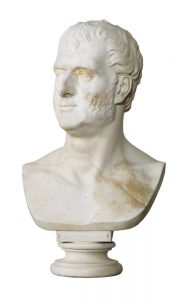 The sitter – after whom the city of Melbourne is named – was British Prime Minister when Port Phillip was settled in 1837, also the year in which this idealized, larger-than-life bust was carved and first shown at the Royal Academy. It was later owned by the Melbourne branch of the Oriental Bank (until 1884), and was then in a local private collection, from which it was acquired for the NGV for a negligible sum.

The artist trained with Sir Francis Chantrey (1781-1841), whose enobling style of portrait sculpture he emulated.

For another portrait of the sitter, with further information on him, see Dowling after Partridge Lord Melbourne 1884 {1884} NGV [PA].