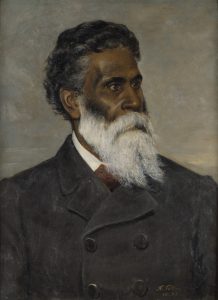 For William Barak (1824-1903), see linked artist entry, and separate entries on two of his paintings acquired for the Melbourne collection prior to 1905.

This portrait was commissioned by the donor (1838-1936), an advocate for Aboriginal rights, and one of several people who lobbied successfully in the late 1870s to ensure that land at Corranderrk was reserved for the Aboriginal people living there (including Barak), rather than being sold to pastoralists.

Clearly documented as donated to the Public Library in 1901, this canvas is not listed in NGV 1905, and may have been understood as belonging to the Ethnographic collections of the library at the time. However, it was included in the “Centennial Exhibition” held in Melbourne in 1888, presided over by Victorian Governor Lord Loch – for whom, see e.g. May (P.) Loch and Key 1888 {1903} NGV [DR].

Florence Fuller trained first at the National Gallery school in Melbourne, and then with her uncle, Robert Dowling. After the latter’s death in 1886, she completed his portrait of Lady Loch, who later became one of Fuller’s patrons. It has been suggested that the dignity with which the sitter is treated, in the present portrait, may reflect Dowling’s sympathetic portrayal of indigenous Australians in works like Tasmanian Aborigines (1856-7; purchased for the NGV in 1949). After 1892, Fuller worked as a portraitist in France, England, and Western Australia, before settling in New South Wales in 1911.

The SLV catalogue provides a detailed entry (including the suggestion of the possible influence of Dowling’s representation of Aborigines); see also Downer & Phipps Victorian Vision (1985), cat.95 and p.54