Robinson (1791-1866), a builder by trade, and a devout Christian and lay preacher, migrated to Hobart in 1824. In 1828, he was appointed by Lt-Governor George Arthur to attempt a “conciliation” between Tasmanian settlers and the local inhabitants, eventually achieving “peace” by relocating the few remaining indigenous people to Flinders Island in 1835, with the assistance of two of them, Woureddy and Truganini (there are various alternative spellings). The event was re-staged in Benjamin Duterrau’s painting The Conciliation (Tasmanian Museum and Art Gallery, 1840), developed from an engraving published by Duterrau in 1835. 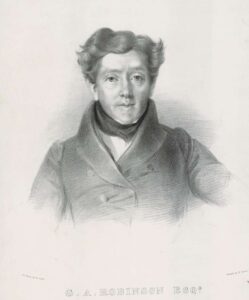 The present print is noted as an engraving in the 1865 NGV catalogue and the 1870-71 Annual Report, but without providing any details of date or authorship. However, it seems likely that it was an impression of the lithographed portrait by Gauci (details as shown above). There are impressions in the National Gallery of Australia, and the National Library in Canberra, the latter published in London in the 1850s, and titled “G.A.Robinson Esq., Chief Protector of the Australasian Aborigines and the pacificator of the Aborigines of Van Diemans {sic} Land…” (see photo reproduced here).

The SLV also holds a plaster bust of Robinson made by Benjamin Law (1807-82) in 1836, and first documented in the NGV catalogue published in 1865. Gareth Knapman (2010), discusses the implications of the title “Pacificator,” also inscribed on the back of the bust. Law also produced two famous plaster busts of Truganini and Woureddy at the same time (1835-36).

From 1839-49, Robinson held the position of “Protector of the Aborigines” in Port Phillip, subsequently returning to England for the remainder of his life.

[comparative photo: impression in the National Library of Australia]