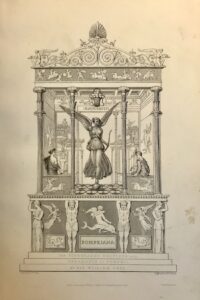 The author, an illustrator and archaeologist, spent the earlier part of his career investigating sites in Greece and Asia Minor. From 1817 he was occupied largely with his studies of Pompeii. Gell accompanied Princess (later Queen) Caroline to Italy in 1814, and was a friend of both Scott and Byron. From 1820, he lived mostly in Rome; he died and is buried in Naples.

Volume I contains 88 monochrome plates, engraved by Henry Moses and others after Gell’s own drawings.

More recently, the SLV also acquired a copy of Gell’s early Topography of Troy (1804), an account of what Gell believed to be the site of the Homeric city, illustrated with hand-coloured prints after his own sketches made on a visit to the Troad region of Turkey in 1801. The area he documented was a little to the south of Hisarlik, the site later excavated by Schliemann and now accepted as the original location of Troy.

See SLV catalogue (noting 88 plates of engravings, contained in vol.1). The SLV also holds a French ed. of 1827, based on the first publication of 1819 (date of acquisition unknown)