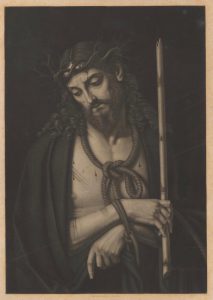 Solari (also called Solario) was an important Milanese follower of Leonardo da Vinci. The authoritative 1987 catalogue by D.A.Brown apparently lists his paintings of the Ecce Homo in Philadelphia and Leipzig as autograph, also noting similar versions (e.g. in the Poldi Pezzoli Museum, Milan) as good products of his circle. It is unclear exactly which painting formed the basis for this print.

Geller, whose name appears below the image, was a prolific painter and engraver, documented as active in London, particularly during the 1840s.

The current NGV catalogue, noting Herring as the donor, describes this print as by an unknown print-maker after Solari; also listed in PF, under 1868