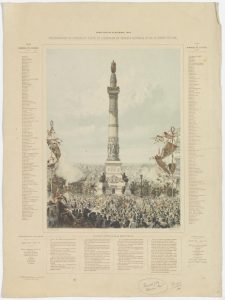 The constitution of modern Belgium, which dates back to 1831, was commemorated in the Colonne du Congrès or Independence Column, erected in Brussels from 1850-59, to a design by Joseph Poelart (1817-79).

The printmaker (known only by his single name) was born in Paris, worked in the USA, and was then active as a lithographer in Belgium from 1845 until he returned to Paris in 1861.